Making a Rhythm game in 72 hours

Last weekend, a group of three people (myself, Thoof, and Beardy) made a rhythm game in 72 hours for a game jam.

This is not a technical devlog - more of a visual timeline of how the game came to be.

Limitation: Your game must take place in one room

I started with a bunch of ideas:

After about 15 more of these bad ideas, I was frustrated and decided to take a more silly approach:

I said screw it and decided to pick this idea.

I had a few goals with this jam: focus on good gameplay, focus on good controls, and focus on letting the player succeed. I thought that a rhythm game might satisfy all of these things.

Also, I had already found an awesome musician (Beardy) willing to work with me on the game and a rhythm game would be a great match for having a musician on hand.

I hit up my friend and fellow game developer Thoof and asked if he would help out with art. He's a really great pixel artist. He happily agreed to help out.

Meanwhile, I had work all day but managed to put together a google doc outlining the game so that Thoof and Beardy could start thinking of ideas. Here are some snippets of that doc. 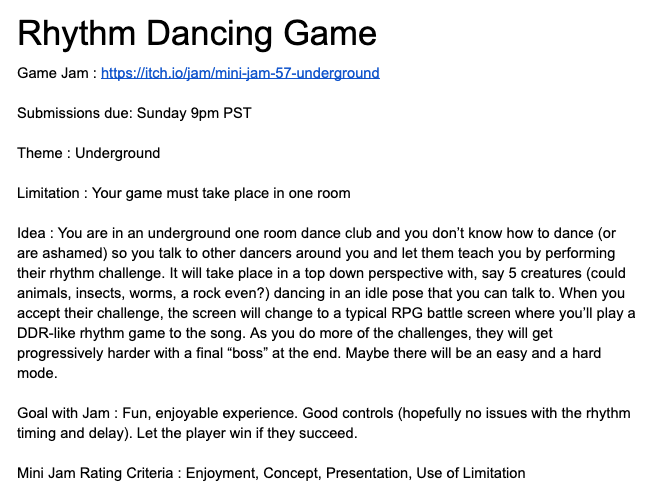 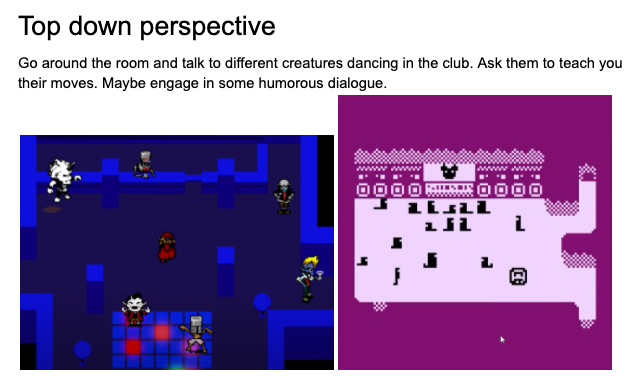 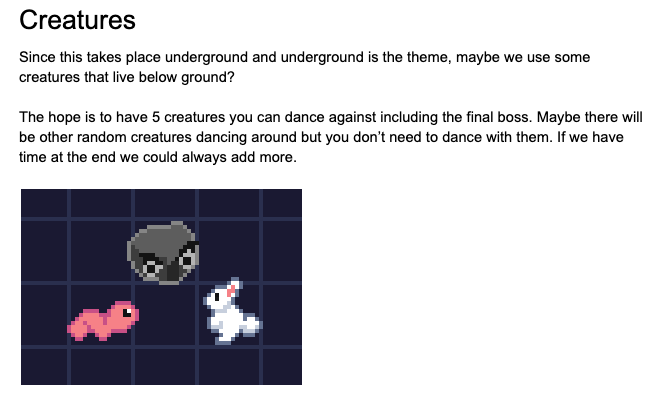 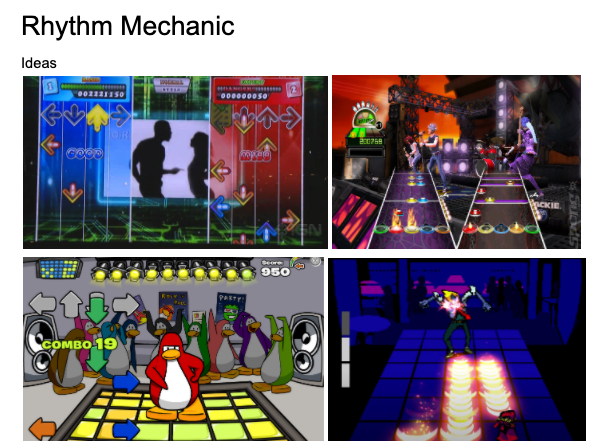 Here are some character designs that Thoof shared with me based on the doc.

Super duper cute. We were really trying to go for creatures that fit "Underground" which is where the rock, rabbit, and worm came from.

Beardy got started on the music as well and came up with this club theme. The mix really makes it feel like you're in a club without being overbearing!

At the end of the day, I finally began working on the game.

In the past, I had been bitten in the ass for waiting too long to work on the main mechanic, so I decided to start with the rhythm implementation and make sure that part worked first.

Here was the basic mechanic in action with notes moving to the beat.

I was pretty satisfied with this already and decided to call it a night and start early the next morning.

I knew this was the day that the bulk of the game needed to get done so that I could have all of Sunday to polish it up and fill in content (like dialogue, note structures, etc).

Thoof supplied some mockups for the club room and I started adding it into the game. 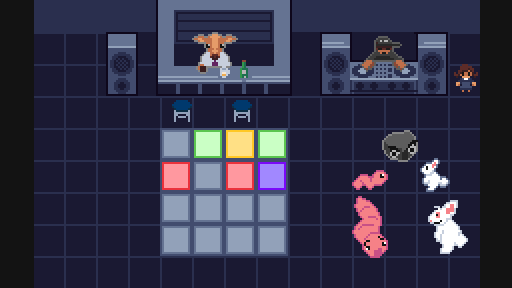 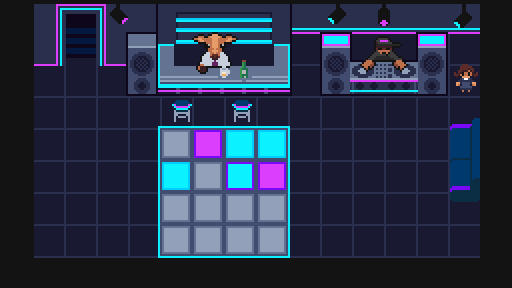 I implemented the art, added some lights, a dialogue system, and then the initial dance "battle" screens.

Last but not least, Beardy sent me the first four battle sound tracks. You can watch one of the battle tracks below.

Thoof helped me with a much needed revamping of the buttons on the UI.

The rest of the time was just filling in all the dialogues, adding the notes to the songs, adding in the boss, and polishing up the UI.

The boss is by far my favorite part of the game and Beardy killed it on the boss theme. I won't spoil it though :-)

In the end, we ended up getting 2nd place in the jam which is a great result! 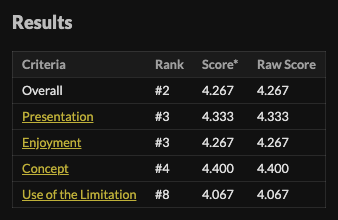 Get A Midclubber Night's Dream

Groove to the beat in an underground nightclub