Survive 10 nights, each painstakingly harder as you get to pick a curse for yourself!

bro this is such a cool game

YOOO I BEAT IT ON INSANE EVIL LESGOOO. Amazing game :]

Really fun and easy to learn, gets crazy fast

This is such a stylish game! I was looking for 1 bit inspirations and this game is really a gem.

A quick question: How did you get the "3d" effect for some of the enemies? i.e the cylinders whose glasses rotate around them or the 'cake' enemies (they look like stacks of cylinders) that rotate. Did you do some kind of sprite stacking? Or are these true 3D models?

Hi thank you :) Everything uses stacked sprites except for the player character.

Thanks a ton for the response, that makes sense! Also thanks for the kind words haha, glad you enjoyed it!

Took longer than it should have but I beat it on Insane Evil! 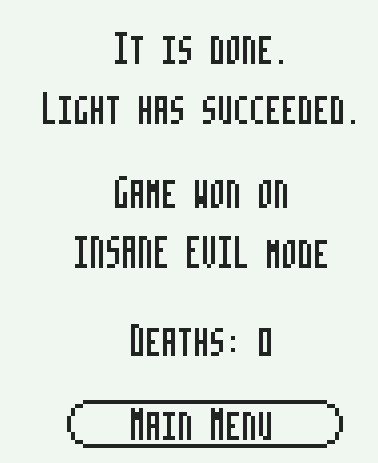 I FINALLY BEAT IT

oh this was fun

time stop and drift were very easy curses to deal with (used to lag and sticky keys), but then i picked 'random pallet chosen every night' for round 8 and it chose a bright cyan and neon green that blended very well together and made it very hard to see! very fun game! i enjoyed it very much

This is a great concept and well executed.

At one point it randomly decided to add a curse to me mid-level? I suddenly fell to the bottom of the screen every life and couldn't move upwards, only side to side. On one life it made me move to the bottom right corner and get stuck. Once I died again it just made me go to the bottom again, not the right. Is this a glitch or a randomly chosen curse once below 10 lives?

Game: One of your keys is held down

Me who's been playing with drifty joy-cons for years now:

I was so confused. I thought that the curses will help me, like game-breaking upgrades that will make me invincble or something. Instead this game got harder and harder dude! I loved it!

we well finish done that game?

Loved the idea, the gameplay is fun and the simple art style is really cute, great job !

Nice. Beat it in first try in normal mode.

A fun little challenge, its has a good mix of different curses to mix things up. I do hope you keep working on it and make an expanded version with more enemy types and more bosses to fight, Maybe with something like an endless mode where you just keep going and keep picking up curses for as long as possible.

You assume only short games can be any good?

Great game! I love the idea of using the flashlight against the ghosts. I ended up without being able to see my character, cursor or battery by the end… Awesome concept!

A very fun game. The black/white swap was a fun curse (the music changed to a very exciting tune as well), along with the dots and the ink. It gave the final boss a unique flair.

Super cool, one of the best ones on this site!

The hardest curse is obviously the inverted black in white.

nah you don't get it man, it's the pallet swap

Inverted black and white is super easy once you get used to it. Same with pallet swap. They're basically "free" curses.

yes
this is why it is a joke

This is reallly good and soo unique!

This game is amazing.

the reward is a feeling of success for completing a difficult challenge, which is why I feel like someone couldn't beat it

Great game, lots of charm, all the curses I've seen are fun, especially the ones that change the look of the game, balance is well done and the normal difficulty seems, from my playthrough, just hard enough to be challenging but not hard enough to be frustrating.

I am usually fairly bad at these types of games but I really enjoyed this one.

I never found myself frustrated because the game didn't come hard I got to pick my poison. It was really refreshing to see such a novel concept in what is kinda a fixed game type.

I chose color one time and got my character as a light blue and a dark yellow background. I was in pain.

Hear me out here: a roguelike that only has detrimental upgrades? Trust me when I say, this game is surprisingly fun even if that first question leaves you scratching your head at how that could possibly be.

The premise of The Lesser Evil is really simple: survive 10 nights (levels) in a room with 10 spawning enemies a night that can be defeated with your flashlight; each night, you gain a curse ranging from decreasing your visibility on screen, making the floor slippery, messing with your controls and flashlight visibility, and even outright changing your onscreen colors. The game is simple enough in that it plays like a standard top-down run 'n gun with a couple of enemy variants and a boss; this simplicity and the variety of curses allows the game to have moderate replayability as you attempt to beat each of the 4 difficulties.

While I couldn't find any glitches on the runs I did (2 on video, 5-ish on downtime), I can say that the biggest sore spot of this game is really just the balancing of the curses. For example, there are curses that just change the color palatte of the game, while others insta-kill you if run out of battery power or mess with the aim of your flashlight. Now, this wouldn't be an issue if the curses gradually got worse as you progressed through the nights, but unfortunately you can run into the much more unforgiving curses multiple nights in a row.

All in all, this game feels nice to beat. It's short and sweet, and while the curses can definitely be a detriment, the game never feels unbeatable regardless of the difficulty you're on. If you have 7-ish minutes, give it a try :)

I thought "how can a roguelike be fun when the only things you get screw you over?" and actually it was quite fun.  The feeling of accomplishment you get is refreshing to say the least. 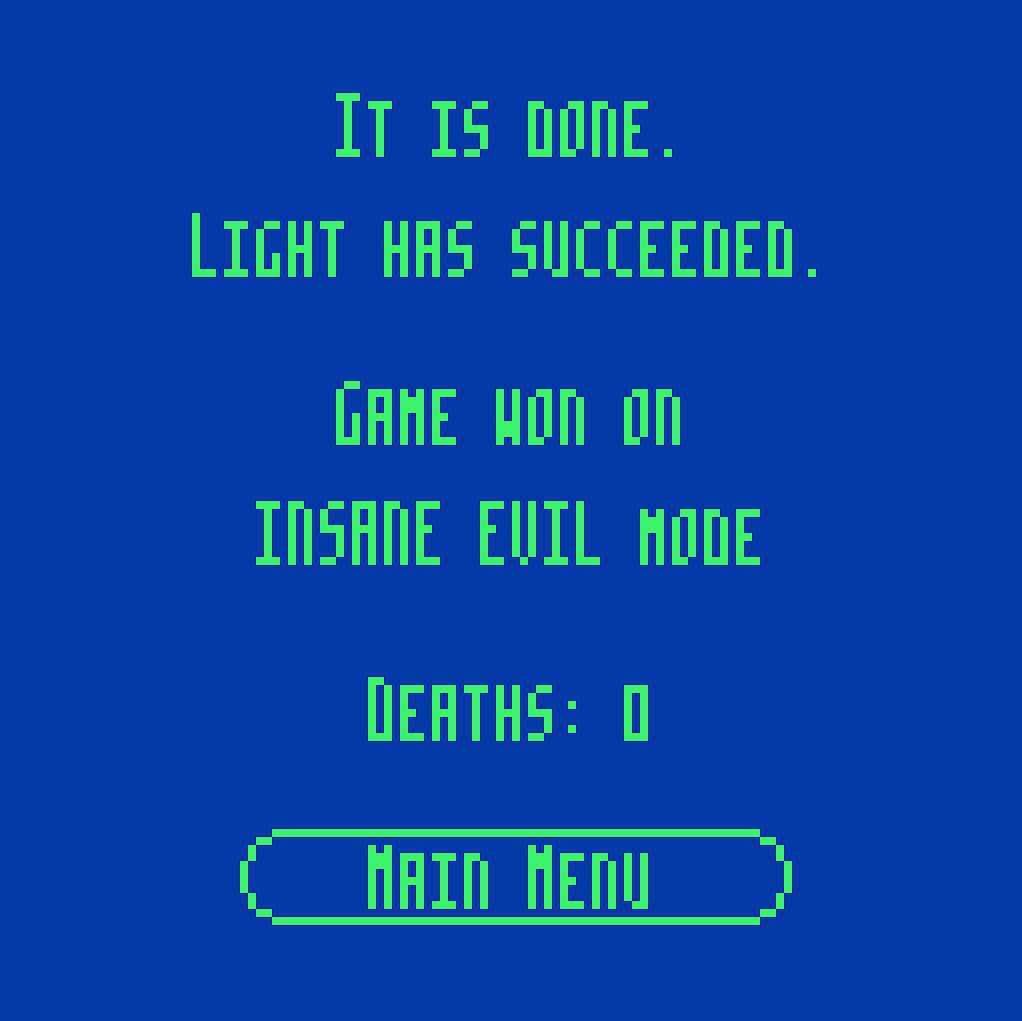 It wasn’t too hard until I started falling towards the edge of the screen.

nice little game , I like the idea of a curse. 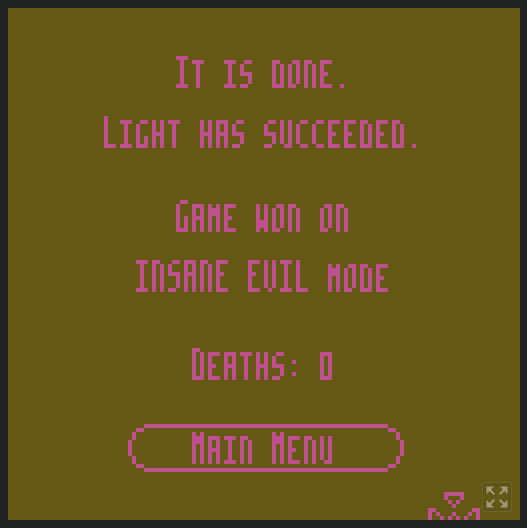 Great game! It took a lot of tries but I never got frustrated with the game at all. Very fun. 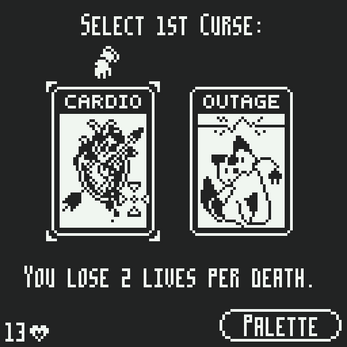 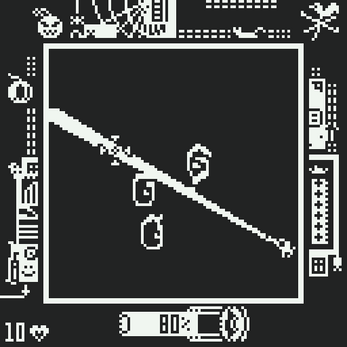